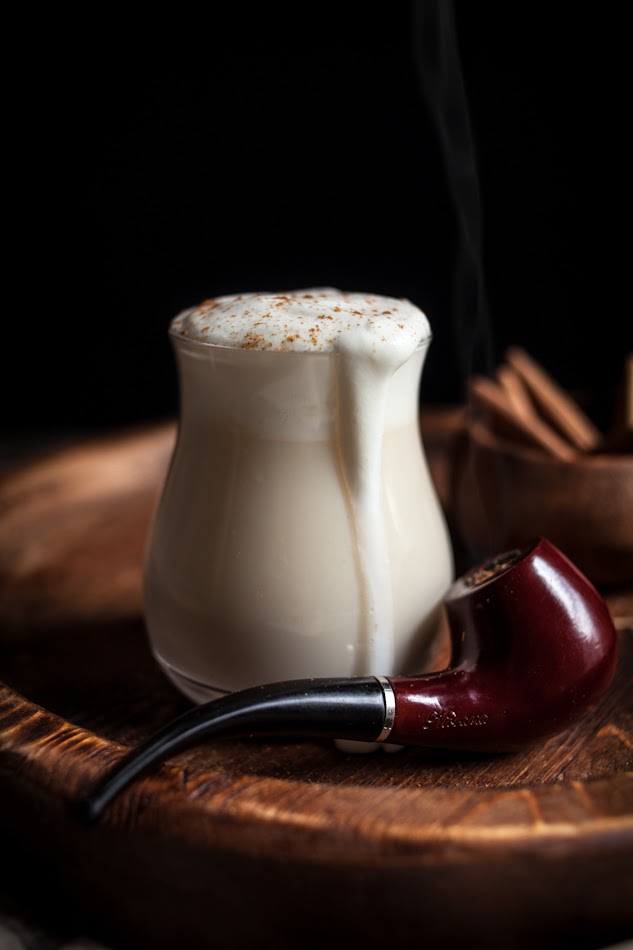 I have a sad secret to share, my friends. For a long, long time, I hated the taste of whisky. This was due to several bad experiences with it in my younger years, and afterwards just the smell made me feel all squeamish and sad. It stunk because Jeremy is a huge whisky fan, and I saw how much he enjoyed the flavor and the long, slow sips of it, and I wanted to enjoy it like that, Ireallydid, but I just couldn’t bring myself to appreciate the flavor of it. Then one day, something Scottish happened. My friend Sarah had just returned from a trip to Scotland and was telling us all about her adventures, one of which was all about the terrible jet lag she’d had. She got horribly sick about 3 days into her trip, and the kind Scottish folks she was staying with provided her with a steaming hot mug of what appeared to be milk. Wanting to appease them after they insisted she drink it, she gave it a go and was pleasantly surprised to find herself with a mouthful of cinnamon, whisky, and cream. Not only did it quell her upset stomach, but it carried her blissfully off to sleep. 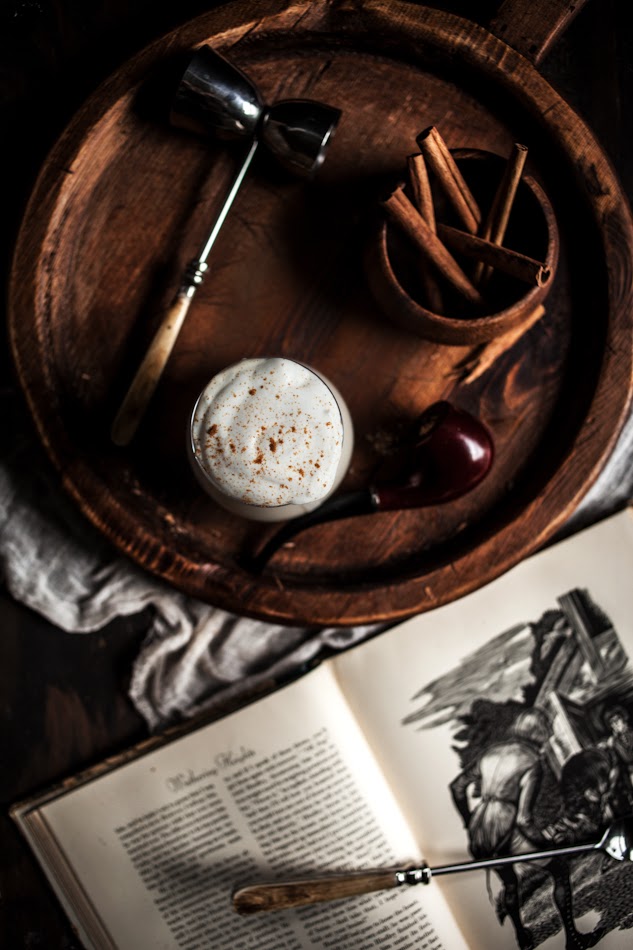 Something about that combination really intrigued me, and I silently wondered if it might be my gateway into the world of whisky. So, I rolled up my sleeves and decided to try and recreate it. I used whole milk to ensure the liquor wouldn’t curdle the liquid, and simmered the milk with a cinnamon stick for a good while to infuse the flavor into the liquid. Then I added someFrangelicofor a buttery, warm, nutty flavor, and to enhance the cinnamon. Then to tie it all together, I mixed in some good old Scottish whisky and topped it with a scoop of whipped cream and a sprinkle of cinnamon. The result was one of the most delicious, comforting, and cozy beverages I have ever had the luxury to imbibe. It was thick, creamy, smooth, and the cinnamon added a wonderful softly spiced dimension to it, and theFrangelicodid an excellent job of lending its rich buttery flavors to the beverage as well. Drinking it made me feel like I was reclining fireside in a woodsy cabin, even though I was just huddling up in a blanket on my sofa in the city for warmth. 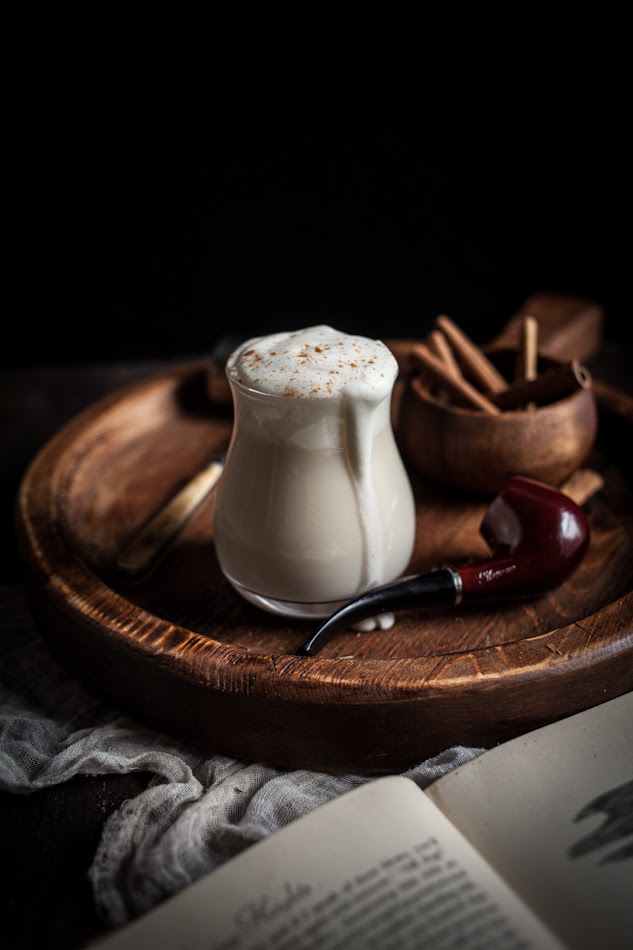 So if you’re looking for something warm and cozy to share with your family and friends (or just enjoy on your own), I couldn’t recommend this any more strongly. It really is one of those drinks that seems to transport you to another place and time when you drink it. Somewhere deep in the highlands of Scotland, where large fires roar in the hearths of old castles and giant hunting dogs curl up at your feet. Where large, broad-shouldered Scotsmen bring you piping hot mugs of milk and whisky andFrangelico, and all is right with the world. 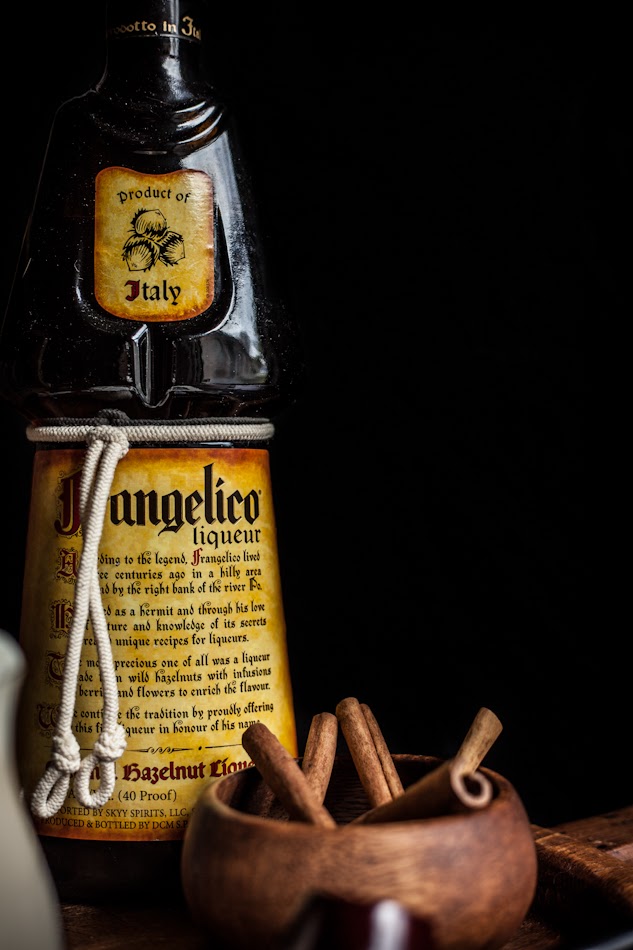 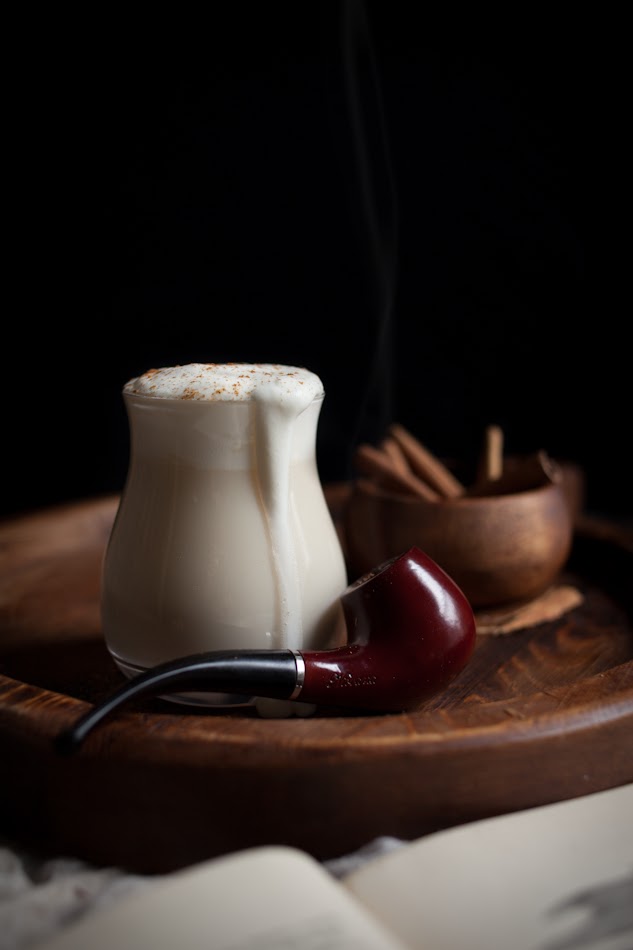 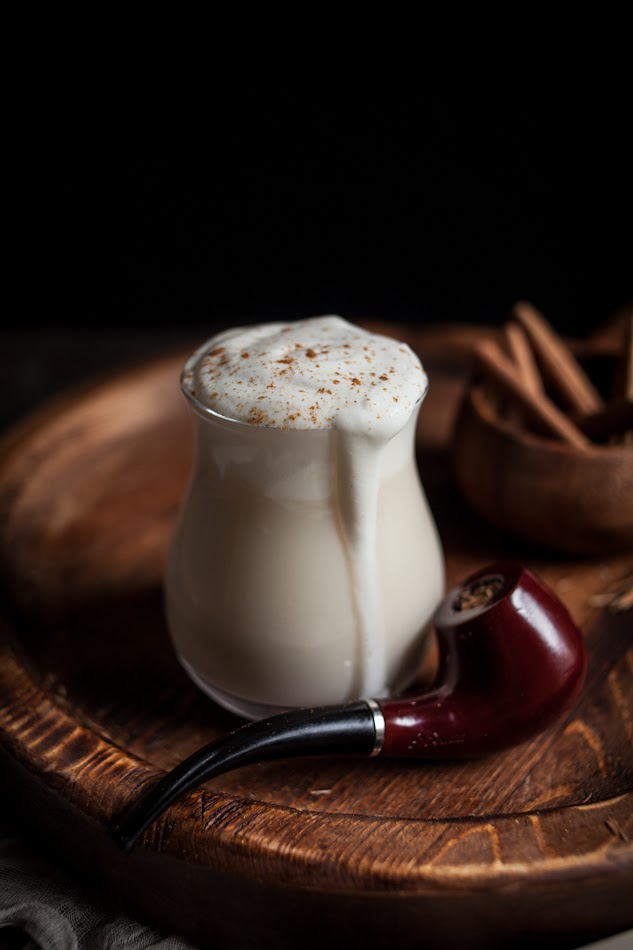 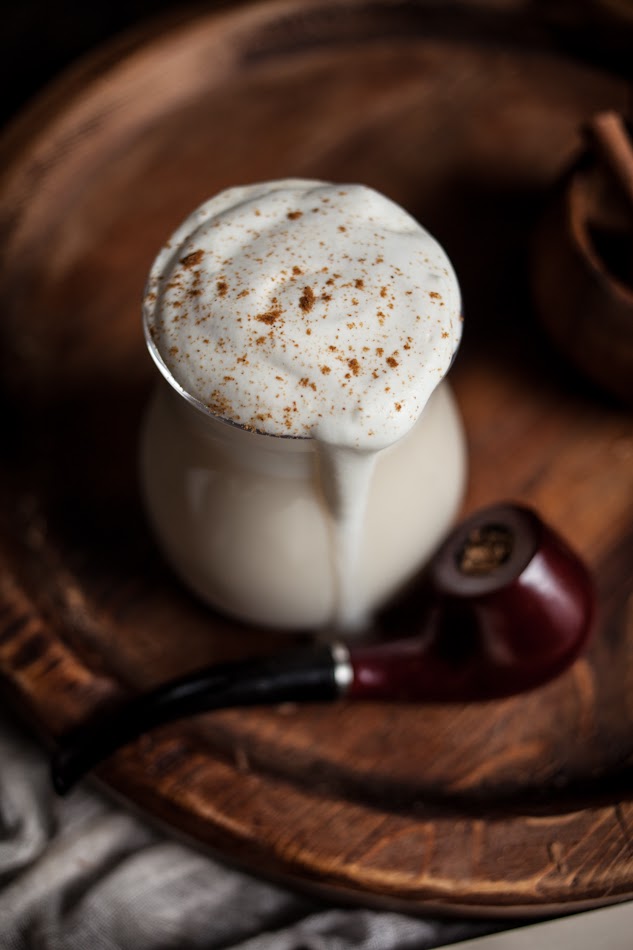 I LOVE this. It sounds so comforting and delicious! Kind of like a hug 🙂

i'm so glad there's no actual melted butter in this–i just can't get behind that. 🙂

Hahaha, me neither! It always ends up separating, which gets weird fast in hot beverages.

This looks wonderful, but there's one small mistake you made: if you're referring to Scotch, it's spelled "whisky" without the "e."

Wonderful! Thanks for the tip!

This looks incredible! I think it might make an appearance in my household during the upcoming holiday. 🙂

Awww thanks David! I hope you do give it a try, it is ridiculously tasty stuff 🙂

This looks really delicious. Guess it is perfect to warm up body during cold day. But I am thinking other flavor. Since I like chocolate, probably I will try cocoa powder or chocolate. 🙂

Ohhhh yesssss. Chocolate would be a wonderful addition to this! If you try it that way let me know how you like it 🙂

I have tried it. But probably I mix in too much alcohol. It’s a bit too strong. Anyway, it did warm my stomach and I have a good sleep after the drink. May try again next time and slightly adjust the portions.

Im enjoying mine right now but Woah its a little too strong…i enjoy my whisky neat but i don't want to sip my milk a want to gulp it! may try adjusting the portions next time too.

Thanks, Eva! I was wondering what to do with the Frangelico in my cabinet! If your husband is a whisky aficionado, look for Penderyn from Wales. They also make a cream whisky called Merlyn, which puts Baileys to shame. Hard stuff to find over here, as there's barely enough to go around in Wales! Happy Thanksgiving! Pam in PA

Happy Thanksgiving to you as well, Pam! And thank you for the whiskey suggestions, I am going to hunt one of those down as a little Christmas present for him! I have been wondering what to get him, and a delicious bottle of whisky would send him over the moon. 😀

Oh. My. God. This is probably the most spectacular sounding beverage ever. I studied in Scotland the summer after my freshman year of college. We toured a whisky distillery, but I was 19 and way more interested in vodka slushies and cider with blackcurrant juice. Sigh. I like rye whiskey these days and haven't had Scotch whisky since I was abroad, which is real silly. We had a disaster with hot buttered rum once, so it's exciting to see a different warm drink to try!

I know what you mean, I was abroad in France for a summer and wasn't much of a wine drinker at the time. Oh how I regret not taking advantage of all the delicious wine that was around me…I could just kick myself for it. Going on a distillery tour sounds awesome! At least now if you wanted to go on another tour you could always take a little trip down to Tennessee, they have a lot of small batch distilleries for whiskey around there that are supposed to be great. It's one of the many vacations I have floating around in my head 🙂 I had rye whiskey a couple times but I've never had it next to a glass of scotch whisky and bourbon whiskey to compare them. Might make for a fun Saturday night though, doing an at-home whiskey/whisky tasting 🙂

This is just perfect! I love drinking whisky and will definitely try this recipe. The light and styling in your photography is beautiful as always!

Thank you so much m'lady!

I'm liking this. A lot. I think it would be a good transition for me too… even at my age. I feel the same way about Calvodos. I always want to like it but it's always so strong. I need to find a softer version like this.
And now tell us who smoked the pipe.

Haha, I smoked it 🙂 It was my first time, and the pipe tobacco smells gosh darn amazing! My grandpa used to smoke a pipe so smelling the tobacco pouch brought back many warm memories. So cozy and comforting…much like the whisky 😉

You definitely should! It will certainly take the edge off of any family-induced stress that may come about.

i have never liked whisky either but maybe I should try it differently.

Definitely recommend giving this a try, it really softens the intensity of the whisky, I was really able to enjoy the flavors of it with this one.

Ok, I have to admit whiskey isn't my cup of tea either, but this looks like a game changer. I'm tempted to raid hubbies whisky supply immediately 🙂

Doooooo it 🙂 You won't have any regrets, I promise!

I actually don't like alcohol that much, but this deserves to be made and tasted. I really like this blog, the pictures are beautiful and look so profesional. Kudos. Thanks for the recipe! I'll be making it for Christmas, I think. Lots of love! <3

I came to your site, and immediately thought "This looks Oregonian.". Love it, though! Awesome site and recipes!

Ahhhhh! I can't believe it took me this long to get back here and leave a comment. (I was so excited when I saw the spoon and jigger on Wednesday, and then work emails and Thanksgiving prep took over my life.) 🙂 The look sooo pretty in the photos. Yay!

It is currently SO cold here (it was 8° when I woke up this morning), and a mug of this would totally hit the spot right now. I have yet to try a drink like hot buttered rum, but I'm pretty sure I'd prefer this anyhow. I love the bite of whisky, and I can imagine how tasty it is with warm spices and milk, and the hazelnuttiness of Frangelico. Glad you're on your way to getting over the whisky hatred! 🙂

This whiskey looks so cosy and comforting! I wish I had a big mug of it in front of me right now! Beautiful pics, by the way, I'm in awe 😉
Have a nice weekend! x

The hipster in me rejoices! Stunning set-up and oooh, that pipe.

Oh, yes! Take me to your fairytale world, please! =) and I love that… "Then, one day, something Scottish happened"!! LOL! =D

This looks soo good! I need to try this! I will practice to make it perfect for christmas!

Like you, I was a whisky hater… until I went to a restaurant that celebrated the drink, and I had a fantastic cocktail with a friend, trying to be brave and prove that I totally was a whisky drinker. That's when the love affair began… and I find myself wanting to add it to so many different foods I cook, as well as make different drinks. Definitely adding this to the wintertime drink rotation because it sounds divine!

I love this recipe. It's funny you spell whisky in the recipe but the link is under whiskey.

This looks nice, but a hot drink should be served in a vessel with a handle. The glass that is shown would be very uncomfortable for a hot drink.

8 Tips for a Zero Waste Kitchen

Roast Chicken with Persimmons and Sage